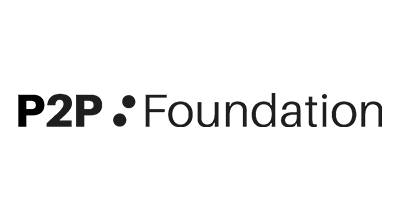 The P2P Foundation (officially, The Foundation for P2P Alternatives) is a non-profit organization and global network dedicated to advocacy and research of commons-oriented peer to peer (P2P) dynamics in society.

P2P is an abbreviation of “peer to peer”, sometimes also described as “person to person” or “people to people”. The essence of P2P is this direct relationship, and its core characteristics include:

P2P is a process or dynamic that can be found in many communities and movements self-organising around the co-creation of culture and knowledge. Well known general examples include the free/open source software movement; free culture; open hardware; and open access in education and science.

The Commons is a concept and practice that has been steadily gathering increased attention and advocates. Deeply rooted in human history, it’s difficult to settle on a single definition that covers its broad potential for social, economic, cultural and political change. The Commons is now demonstrating its power as a “key ingredient” for change in diverse locations and contexts around the world.

P2P/commons-oriented communities, values and practices are now also increasingly present in the world of physical production through open design, the sharing economy and co-working in hacker/makerspaces and Fab-labs. These movements represent a cultural shift towards new kinds of democratic and economic participation that we believe are sowing the seeds for a more sustainable, egalitarian future.

The P2P Foundation, with its particular focus on the relationship of the Commons and P2P practices, is supporting this Commons transition by helping to share knowledge and develop tools to create common value and facilitate open, participatory input across society.